I'll refer you to snopes for verification of this story.
Isn't it amazing the ingenuity God has given to his creation?

Bill owns a company that manufactures and installs car wash systems. Bill's company installed a car wash system in Frederick, Md. Now, understand that these are complete systems, including the money changer and money taking machines.

The problem started when the new owner complained to Bill that he was losing significant amounts of money from his coin machines each week.

He went as far as to accuse Bill's employees of having a key to the boxes and ripping him off. Bill just couldn't believe that his people would do that, so they setup a camera to catch the thief in action. Well, they did catch him on film! 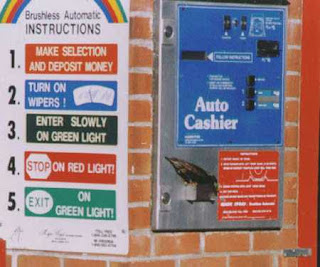 That's a bird sitting on the change slot of the machine. 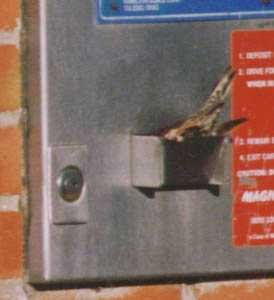 The bird had to go down into the machine, and back up inside to get to the money!


That's three quarters he has in his beak! Another amazing thing is that it was not just one bird -- there were several working together. Once they identified the thieves, they found over $4000 in quarters on the roof of the car wash and more under a nearby tree. 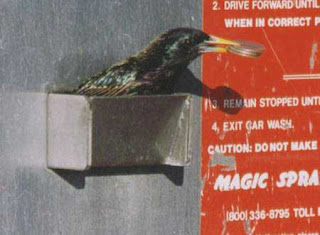 And you thought you heard of everything by now!! !!
And to think the phrase "bird brain" is associated with being dumb. Not these birds. Share the story!!