Hello, it's been a hot Saturday. Jim and I had a nice day. We went garage-saling this morning (what can I say, I've gotten Jim a little bit hooked on going to garage sales too!) :) It's kinda fun to share this with Jim. Anyways, afterwards we ran up to London. We checked out the London Market (it's not as far to drive as the Kitchener one). We bought a zucchini, but we mostly went there just to take it easy and get our minds off of things.

So ... what has been on our minds lately you might wonder?
Stuff going on with the larger church that we belong to. Our church is part of the Reformed Church of America. A while back one of our professor's of theology decided that it would be a good idea for him to officiate at his daughter's wedding to her lesbian daughter. This is not acceptable, neither to the official position of the RCA denomination NOR according to the standards of God as written in the Bible. We just had our general synod meeting. At that meeting there was a trial of Rev. Kansfield were he was found guilty. At that same synod a lot of overtures were turned down... most of those overtures had to do with defining what marriage was and other issues. This has caused quite the uproar in the larger denomination.

What was approved was a three year study on the whole issue of homosexuality. Which really means putting a lot of things on hold in the church for the 4.5 years, because this is supposed to be a denomination wide discussion that involved EVERY level in the church. Takes the focus off what the church is supposed be involved with....mission, evangelism, acts of service and so forth. Some churches have already decided that they don't need to part of our denomination already. It is causing more polarization and anger and disappointment and so forth. NOT what the church really needs.

It is frustrating to see the work of God being sidelined by issues such as this. And how is conversation really supposed to be facilitated when the real issues at hand are being ignored. Issues such as discipline, interpretation of scripture, holding to the standards of the church, and so forth? I honestly think that nothing will really be accomplished in the next few years because the real issues aren't be addressed. All that will happen is that people will leave our denomination. I do hold out a bit of hope that God will use this time to start a revival in our denomination that will spread. That HIS glory and honour and power will be upheld in the highest way possible. Ah....to see a revival occur....wouldn't that be an awesome thing? To see people learn and grow and LOVE God deeply! To give up their own agendas and to focus on what we are supposed to. Would be good of course if I learned to do that better too! :)

Until another day (it's getting late).
Posted by Annette at 9:25 p.m. No comments:

My husband and I enjoy aquariums. We both have different tastes in the types of fish we enjoy. he enjoys cichlids and I enjoy quieter community fish - like rainbows, barbs, etc.

ANYWAYS, here I was quietly taking a nap and he bursts in...HUN! Come see! We have babies!

I slowly (well actually with his help) got up (what can I say....i'm overdue to have our child), and trekked over to the aquarium and low and behold I find we have a whole slew of baby salvini cichlid. Clustered all over one of our rocks. With momma and poppa guarding them. 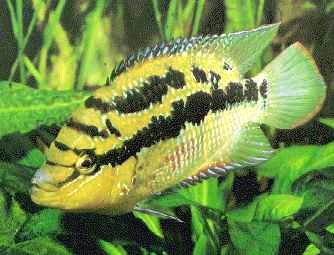 They are pretty good at keeping the other cichlids away from them ... one is better than the other. But then the one sometimes chases it's partner away too! So hey....it's like a bit of a war zone in the aquarium right now.

Unfortunately it means that we need to figure out a different set up for our aquariums...because right now it's a bit of a guessing game as to whether any of them will actually survive or not. Most of them will end up getting eaten by the other fish, and we'd rather have a bunch of babies so we might need to purchase another aquarium to keep our salvini cichlid's in. They'd be a nice little money maker for us in the long run. :) Nice to have baby fish! :)

Anyways, there you have it! One of these days you might actually learn what our child is .... but we are still playing the waiting game with that one!
Posted by Annette at 2:40 p.m. No comments: