I got all the dishes done...lifes been busy so we're talking more than one days worth. BUT they are ALL done!

So I tackled the basement today. AND... drumroll please... I GOT IT DONE! well okay...let me qualify that.

I got it done as far as I can without my hubby's help. An old tv has to come upstairs to the garage. The fish tank needs to go into the workout room, he needs to vaccuum (that's his thing), and I have to do the garage sale corner. It's just a nasty mess back there and needs to be tackled but not today. :) I"ll send the lad off to someone's house for another day or two in May and get that done then. I'll work on it before then but the big push will be then I think. 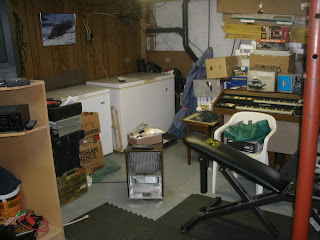 i got the freezers moved over together. To do that I had to move the box pile, the candle making supplies, pick up the mat pieces, move chairs and what not. I cleaned out the one freezer since I was moving it anyways (required me emptying it first). 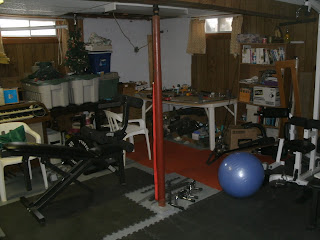 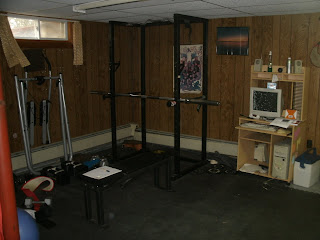 Jim's workout area didn't need a whole lot of anything. It did while I was cleaning as I had to put things somewhere, but now all it needs is a vaccuum. 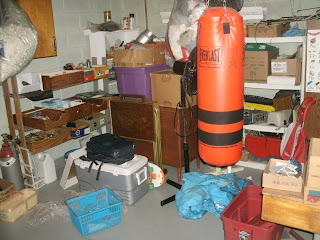 Believe it or not...HUGE improvement in this room. Moved an aquarium. Bagged the gravel from the empty tanks, moved paint cans and tool stuff. There's a fair bit of work to do yet, but I can't do it all in one day all by myself. :) 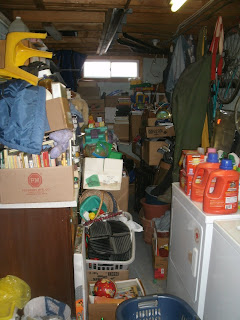 as I said earlier...the garage sale pile needs some MAJOR work. But not today.
now it's 11pm and I want to go to bed.

Yesterday we had a dental appointment, the lad and I. Now one thing you gotta know...I strongly dislike going to the dentist. As a youth I had a dentist who was NOT very nice at all, and it engendered within me a strong dislike of dentists.

I don't want to pass that along to my son so I try very hard to "be brave". To encourage him to not mind going to the dentist, to learn what he can and so forth. I've learned myself to ask questions....I do it for his sake because the more he knows, the more he understands, and therefore has nothing to be concerned about.

And its interesting, the more I help him with new experiences like this...the better I am. I still get the willies about contemplating getting a crown on a tooth that needs it. I know I will dislike it and be uncomfortable and have pain...but at least I'm not running scared of it, and ergo I worry less. And in the end of it...I'm braver. This is not a bad thing. :)

As I was doing bunny chores this morning I was struck by the fact that God doesn't want us running scared of him either. He wants us to know him, to understand him (in the limited way we as people can understand God), he wants us to seek after him. The more we understand God the less worrisome it is knowing him.
Posted by Annette at 8:36 a.m. No comments:

Sheepkinz presents Wait Upon the Lord and He Will Carry You! posted at INSPIKS.

The Eagle can see from great heights and depths below. So too can we, when the Lord reveals the spiritual things to His people.

Instead of a debate or a search for fact I am offering a subjective interpretation of the teachings of Jesus (whether you believe he existed or not or whether you believe he was who Christians say he was or not) that I find helpful in understanding the idea of forgiveness and the possibility of peace.

FMF shows up with Retirement and Building Wealth: The Wealth Snowball Vs. Ocean Tide posted at Free Money Finance.

Wealth is much more than a bundle of money. To be truly wealthy is to live in the presence and the blessings of God.

What is one piece of advice you would offer to someone wanting to get involved in the financial arena of their church?

Scottyi writes Why do People Suffer (pt 2) over at Sacred Raisin Cakes.

The second part of this exploration on why people have to suffer will deal exclusively with the most powerful objection there is to a God who allows suffering in the world.

How Do You Know if the Decisions You Are Making Are God's Will? is brought to us by Ridge's Blog.

We emailed back and forth, and this was my answer:

How long will it take us to realize that the end of the sexual revolution is simply total submission to our animal natures? If you don’t believe me, then take a look at the article around this quote.

Barry Wallace gives us This, by bitter experience, Thou hast taught me posted at who am i?.

We have a dangerous tendency to think too highly of ourselves. That tendency is confirmed by the fact that the Bible warns us, in various places and ways, to guard against it. Romans 12:3 is just one example:

Weekend Fisher presents "But the LORD was not in the earthquake" (I Kings 19:11) posted at Heart, Mind, Soul, and Strength.

Earlier today I chanced across the writing of someone commenting on the earthquake in Japan who said that natural disasters are caused by God. That was said without any qualification at all. I'd like to offer a different perspective.

I'm probably going to get in trouble over this. My neighbors on either side of me have something in common: they recently lost their homes. Both houses burned to the ground — a pretty much total loss.

But the neighbors, and their situations, are not that much alike.

Crystal Rodli presents Reform/Revival: Do we have a Pope Leo IX approach? posted at Treasure Contained.

When Bruno, bishop of Toul was elected pope (Leo IX) on February 12, 1049, he was already on fire with a zeal for the reformation of the church.

And my entry is this Acquiring Bravery.

I don't want to pass that along to my son so I try very hard to "be brave".

William Klein on D.A. Carson's compatibilism is brought to us by Parableman.

I've had occasion to complain before about a problematic discussion of Calvinism in a book review by William Klein (in that case in discussing David Peterson's commentary on Acts). His more recent review of David Allen and Steve Lemke's Whosoever Will: A Biblical-Theological Critique of Five-Point Calvinism critiques D.A. Carson in a way that I also think is a bit unfair, and he doesn't represent the terms of debate accurately, even apart from the fairness issue.

A number of years ago something occurred that will forever leave a sober realization.

So this weekend I'm on a retreat held by the women of our denomation.

We're are trying and hoping to revilalize women's ministry on a denominational level within the body.

In the past, that's meant two conferences a year with a social time and a speaker.
In the past two years they've changed the conference so that in the fall there is a social time with a speaker and then in the spring they have a work day with a speaker. People go and do community projects and basically learn new ways of doing things in reaching out the community and in the afternoon they have a speaker and a time of sharing what all happened. They pick a community to go to. This year it's in Welland.

ANYWAYS.. enough of the history. There's about 6 of spending the weekend, a bunch more came during the day yesterday. We're having a decent time talking and laughing. We're getting ideas...many of them centering around the idea of mentoring, and using the classis as a resource tool for being able to connect with other churches and denominations who may be tackling the same issues. Perhaps we can work together to bring about situations where God can work in the lives of those around us. :)

Came to an epiphany this morning. I've struggled with the fact that I have only one child. Was talking with a lady this morning who notices that I'm never right in the middle of the crowd...that I'm often on the edges. I replied that it's because I'm not real fond of being right in the middle of a crowd...I'd rather be on the periphery. I like listening to people talking, but I find too much talking confusing at times and I don't know who to focus on. And that sometimes I struggle with that at home when both son and hubby are talking and I don't know who to listen to first. I told her that I REALLY like one on one conversations. Then I left for my walk. On my walk I realized that it was indeed a blessing from God that I have but one child. Means less stress overall in my life. Means that I can focus on him. And means that I can focus on my hubby at times as well. Hmm....guess that God really did know what he was doing eh? Despite the heartache of miscarriages he does know me best of all and really does care for me in the big picture. Kinda cool huh? :)

Anyways, today we have a worship service and some more conversation I think and then time to head home. It's been a good weekend overall. I'm rather tired because I didn't sleep well last night, but overall....it's been good. :) The leader threatens to put pics of me up on Facebook...not sure what I think of that. :)
Posted by Annette at 7:45 a.m. 3 comments: