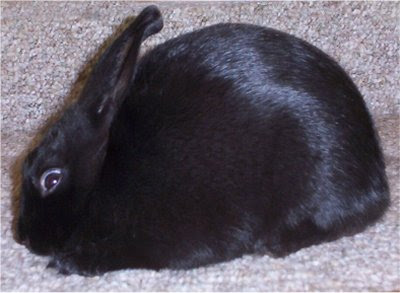 So the two bunnies that I got from Fred (the black girls) had their kits born yesterday. They had a whole whack of them. Not sure if both kitted out or just one, but there's a fair number of them in there. I moved them just in time so they had a nesting box ready for them. :) Yeah for me doing that in the nick of time. :)

And lop hop's sister (brown girl) had ONE baby born this morning. I put two of the black girl babies in with it as when I touched it, it was fairly cold but still kicking. I warmed it up until it was moving fairly well and then added the two others. I don't know if brown girl will accept them, but three babies will keep each other warm, whereas one baby can't. And I want to give brown girl a chance to raise a baby (or three) successfully. Hopefully it will work and then at Easter they can find new homes to live in.
Posted by Annette at 11:38 a.m.