Yesterday was Victoria Day here in Canada. A day of fireworks and stores being closed. Does anyone really celebrate that it's a reminder of the our ties with Britain? I dunno, I know I don't. :)

Our day started with me doing a bit of gardening while the boy woke up. And then I mowed the front lawn while he designed a game to go to gramma's house. Stopped at Dollerama here in town so that he could pick up another toy foam shooting gun. :)

Had two rabbits to sell so I brought them along with me to London, and had a nice chat with their new owner. Like me, he's going to get out of Mini Rex...for similar reasons of really really liking the polish temperament.

Gramma, the lad and I had fun playing and talking together. We took some toys to the school grounds and flew them. It was fun.

Went home played and talked some more and then out McD's for a late lunch. I left gramma and the lad to play and headed out to pick something up from Freecycle (some files and wrenches) and then stopped at the civic gardens for a walk. AH... it was so lovely and quiet. I took tons of pics (posted them on facebook). Just a lovely day.

Headed home for 6 pm were we relaxed for a bit (I checked emails, J watched Gilligan's Island) and then out to do the bunnies. While I did them J played in our mud pile. I'm actually quite impressed with the moat he has made and how much fun he has playing with water and figuring out physics and engineering. If I put a hole here..AH!!!! the bunnies of bunny town have to fix the hole!! AH!!!! the baby bunnies are going to drown!!! 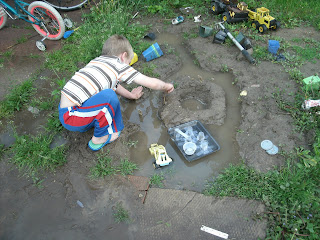 here he built a boat and is checking out how it floats. 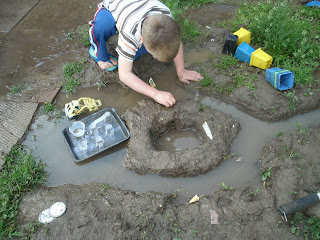 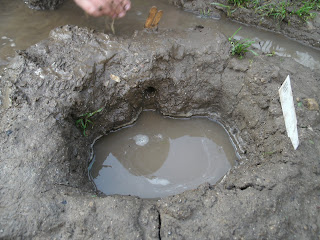 see the hole! and then he got it fixed and then the BAD CATS broke it again!!
The game of discovery would have continued except the lad got bombarded by those bugs that like to fly around your face and just drive you batty.
My batty son went into the house to recover himself.

We then had supper and he went to bed. :) I had a nice chat with hubby over the computer. His knee is sore, but they are enjoying themselves.
Posted by Annette at 6:52 a.m. 1 comment: Links to this post 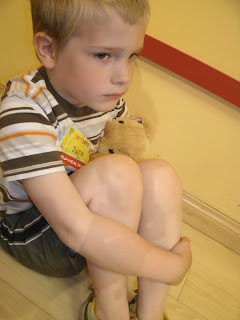 Yesterday the lad went to his first ever birthday Party. I took lots of pictures but I don't post pics on-line of other children because it's makes some mom's nervous. But I did take a couple of the lad. :)

After the party we went to Costco to see if we could find something for Jim's knee which is bunged up right now. (No)

then off to home health if they had crutch covers, (no) so off to Wal-mart to see what they had (ice packs meant for knees) YES! The lad had fun riding around on a bicycle. He knows which one he likes... but the one we like is just a bit bigger and will last longer... so we're thinking about it. :)

Then off to The toy Store which is having a 50% off sale since they've been bought out. We got some stuff. The lad had to do some math and problem-solving so we wouldn't take home too much as I can't afford it. :)

Then home, Gramma came to pick up the lad since we're off to Chatham today. So that's a brief update for you all. :)
Posted by Annette at 7:36 a.m. No comments: Links to this post

Labels: family, my hubbie, the boy

Getting a bit more serious

About losing some weight.

Tired of having the boy be able to outrun me...he's only five! What happens when he's 14 and wants to play basketball? :)

So time to start figuring things out a bit better now I think. :)

To that end I joined Jim over at my fitness pal. Will monitor my food intake/exercise and see if that makes a difference in my overall eating patterns, and hence my waist line. :)
Posted by Annette at 12:01 a.m. 1 comment: Links to this post